I have 5 projects on needles right now and none of them are inspiring me to completion. A couple of them have the feeling of an obligation knit, they aren't but they've been lingering for too long. I know I should just give them the few hours needed to finish but I have this mental block even though I like them.
The other ones I don't know if I like them enough and I'm this close to being finished. But if your mantra while knitting past the half way point is, "I should stop since I'm just going to rip this out" then maybe you should.
And what's the point of this? Well, in trying to avoid the above projects I was going through and organizing some photos, found these and wanted to share. 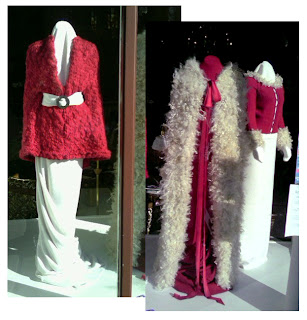 I think this was my Holiday window display in 2006 for Knit 1 in Chicago. Unfortunately I didn't take the time to photograph this properly but luckily my husband snapped a couple from the street with his phone. I wanted something Dr Zhivago dramatic and something that would really grab peoples attention while they were driving by. I always thought about making stand out pieces when I would change the window and always tried to out do myself.
The cape on the left was made with Malabrigo's Gruesa a thick/thin wool and #13's. It's hard to tell from the photo but it was probably the best true red I had ever seen with this shimmery quality that is hard to describe. While the front is more fitted with the belt the belt sits on your back on the inside hidden when looking at the back the back is very full and has a great swing to it.
The middle cape was made using a yarn my friend Sandy spins and #15's the dark square patches on the cape are shadows from the window. She takes the uncombed locks from her sheep and spins it to a wool core yarn. In this case they were the locks from her Cotswold sheep. The effect is like wearing a fur without any of the guilt associated with fur. I love the romance of this cape! Using short rows on the bottom I flared it out to have a train and added a hood as well. I made eyelets around the neck line to weave in the red silk ribbon that ties at the neck. I've thought about ripping this back to a knee length and cutting armholes to add sleeves so I could actually wear this but I want to get one really good photo of it before I do. So in the meantime it sits in a rubbermaid with the rest of them, which is wrong I know but what do you do with them all?!
And last but not least the one on the right. It's a cardigan my husband called "Sexy Claus". It's a cardigan made with Cascade's Pastaza another very nice red and trimmed in more of Sandy's curly yarn. It's a raglan top down with cables running the length of the raglan "seam" worked on #9's for the body & #15's for the trim. I used hook & eyes for the closures in front so it's a bit open you can see the gaps in the photo and made the collar a bit wider to show off the neck. I could be the hit at a Christmas dinner if I could ever remember to pull it out of those damn rubbermaids! 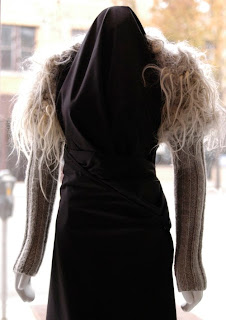 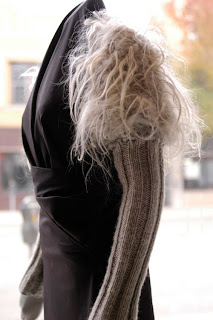 This is another piece I absolutely love and one that always got a reaction from people. Worked up one sleeve across and down the other it has kind of a Mad Max Tina Turner feel to it. The sleeves are made with Cascade's Eco Wool and #8's. The hairy section is made with more of Sandy's yarn this time the locks from a Karakul sheep. I didn't have much of the yarn with the blond strands so those are only on the shoulders and for the back I used a Karakul as well but with a thick/thin look to it. It's salt & pepper in coloring and was what Sandy used as the core for the yarn with the long strands. I think I knit the shoulders and back on #15's. You can just see where I started working the Karakul I worked eyelets around and made an i-cord to weave through. The i-cord is then joined and sewn together on the inside so it really doesn't serve any purpose. I've thought about reworking the sleeves and getting rid of the i-cord woven through since there's enough going on without it. But if you ever wanted to get someones attention this would be the piece to wear!
I think I should stop here, I'm ready to get back to work. Who knew I'd find inspiration stored in a rubbermaid!
Email Post 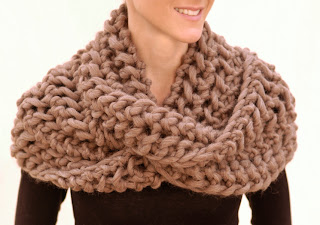 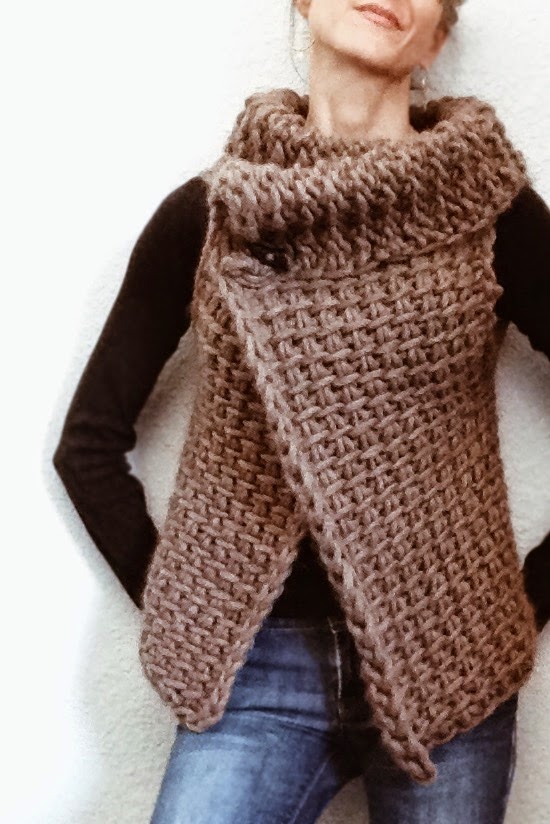